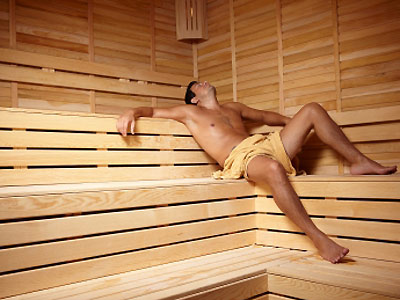 Hitting the tubs. Taking the vapours. Making a pilgrimage to Our Lady of the Mists…

If you’re a gay man, there’s a possibility you’ve visited a bathhouse at least once, and probably familiar with the ritual.

What happens in a gay bathhouse?

A ‘membership’ fee provides you with entry, a towel, and the privilege to utilise various steam, shower, spa and dry sauna facilities.

It all contributes to an atmosphere of being in the — quite literally — steamiest place in town.

Though closely aligned with gay culture, bathhouses have been a fixture of the general population from way back. Community bathing facilities were common in ancient Greek and Roman times, often featuring quite sophisticated heating systems and swish architecture.

Even in these times, bathhouses were social hubs for gay men, allowing numerous opportunities to discreetly hook up with the like-minded away from the public gaze, and goss about the hot gladiator they saw at the chariot races that afternoon.

Over the years, bathhouses would pop up all throughout Europe, Asia and the Middle East, with venues starting to appear in England and the States by the end of the 19th Century, allowing a public (who would have to wait a few hundred years to enjoy the benefits of home plumbing) to wash, socialise and generally kick back.

Gay guys were, of course, continuing to find additional uses for such establishments, leading to inevitable heavy-handed doorknocks from local lawmakers investigating allegations of unsavoury behaviour or unauthorised sex work.

The Golden Era of bathhouses: From run-down haunts to plush shag palaces

With the arrival of the 1970s fuck-anything-that-moves ethos and wider acceptance of homosexuality, bathhouses enjoyed a golden era, evolving from often-dingy run-down haunts to plush shag palaces.

Rather like the way straight folks in the ‘90s first furtively ventured into gay bars to watch a drag show when Priscilla hit the cinemas, the tubs became cool and the average punter suddenly wanted to experience these monuments to the decade’s sexual revolution.

Films and plays, like Terrence McNally’s deranged comedy, The Ritz, were set in obviously gay bathhouses. Some celebs even got their start in showbiz as entertainment at such salubrious environments, though the humidity invariably made stage makeup run like a water feature.

As practically everybody now had access to their own bathrooms, the purpose of the bathhouse seemed redundant, but their popularity as a gay social/sexual hub never waned.

In Australia, saunas (as they tended to be known here) catering specifically to a gay clientele started to appear in the 60s, allowing queer and closeted men to explore their sexuality in a time when even consenting same-sex relations were illegal.

Even after homosexuality was decriminalised, a night at the baths was a perfect way (with benefits) to laze the day away or cap off a night of dancing.

The role of bathhouses in cementing HIV awareness into gay culture

The onset of AIDS in the ‘80s cut a swathe through both the gay male population and the bathhouse culture. In America, some government authorities used public health orders to shut establishments down or intensely scrutinise their operation in order to head off a perceived ‘epidemic’.

With bathhouses quite literally being the coalface of gay sexuality, many fledgling HIV/AIDS organisations turned to collaborating with sauna operators, providing education and awareness campaigns on safe-sex practices and sexual health.

These and other community initiatives contributed to cementing HIV awareness into gay culture, and enabled gay guys to continue sexual exploration during a frighteningly uncertain time.

Today, many saunas choose to operate under various health guidelines designed to ensure the safety and wellbeing of their patrons, such as ACON’s PlayZone code of practice.

Such codes request that facilities comply with cleanliness and safety criteria, that patrons are treated with respect, and that information about safe sex, HIV/AIDS and STI prevention and education is readily available.

Staff are also required to be versed in the basics of sexual health, and be able to answer queries or direct patrons to the relevant information.

Additionally, ACON’s Sexpert program, involves volunteers who attend saunas such as Sydney City Steam to answer any queries or concerns patrons may have, enabling sexual health awareness and knowledge to be provided at a community level, contributing to the objective of ending HIV.

Despite the rise in online and app-driven courting/socialising/bonking, bathhouses still remain a foundation of gay sexual life, with many preferring a sauna’s intimacy and immediacy instead of the seemingly endless dance of pic and stats swapping.

They have remained a ready avenue for HIV education and advocacy campaigns, where toweljockeys can be reminded of the importance of sexual health maintenance and enlightened on the latest in prevention strategies, such as PrEP.

And what’s more, a patron can explore their sexuality in a safe and hygienic space, with all the benefits of a health club.

What could be steamier than that?