The results are in from an Australian based international study called ‘Opposites Attract’ on HIV transmission risk among gay couples with differing HIV statuses (known as serodiscordant couples). The study conducted by The Kirby Institute, has shown that HIV positive men who are on treatment and have an undetectable viral load (UVL) do not transmit HIV to their partners.

But didn’t we already know this? – Sort of, let us catch you up. In 2011 a study of heterosexual serodiscordant couples in Africa determined that early treatment led to a massive reduction in risk of transmission. Following this, two studies were developed to investigate the impact of undetectable viral load (rather than just early treatment).

In 2016 the PARTNER study results were published and found no HIV transmissions between 888 serodiscordant couples, after an estimated 58,000 acts of condomless sex while the HIV positive partner maintained an undetectable viral load[1]. That is a lot of sex! This study included both heterosexual couples and male same-sex couples. These findings added to the confidence that TasP (Treatment As Prevention) was a highly effective method of reducing HIV transmission.

So if we have that already covered, what is the significance of this local study?

These results told us TasP worked with heterosexual couples, which is why Opposites Attract and the PARTNER study have been so important in clarifying that it works just as well for men in same-sex relationships.

Opposites Attract is also unique in that it included gay male couples from Thailand and Brazil, areas of the world where these types of studies had not previously been conducted. 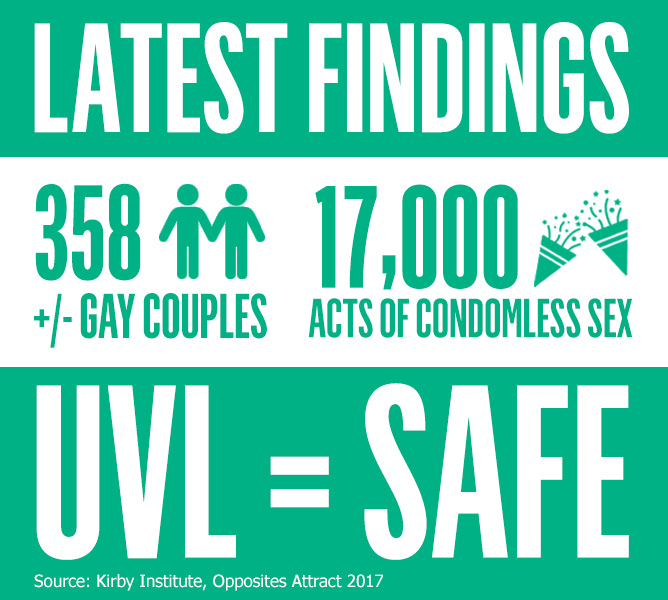 Throughout the duration of the entire study, and another 17,000 (or 16,889 to be exact) acts of condomless sex, no HIV negative partner contracted HIV!

This is great news for people living with HIV, as it’s another endorsement of treatment as prevention and confirmation that by going onto treatment you are not only looking after your own personal health, but also that you can have confidence that the risk of HIV transmission is small. This is great news for HIV negative men also, as it will provide even more confidence in TasP as way of preventing HIV transmission.

Read more about HIV treatment and undetectable on the Ending HIV website and find the full Kirby media release here.

For further details on the Opposites Attract study, you can read the Aidmap article here.

Confront HIV/AIDS Stigma and Come Together as an Ally

Why your community needs you

See More
Temporary or Not, Let’s Connect as Friends

This article is also available in Simplified Chinese. I remember how sad I was the day Owen left Australia. He didn’t want to leave. He’d fallen…

First being diagnosed feels like you have been given a life sentence. You feel isolated and alone. You are left within the whirlwind of your…

See More
Why everyone needs to know about PrEP

This article is also available in Simplified Chinese. I first discovered PrEP after making a silly mistake. It was my second year in Australia. My new-found…